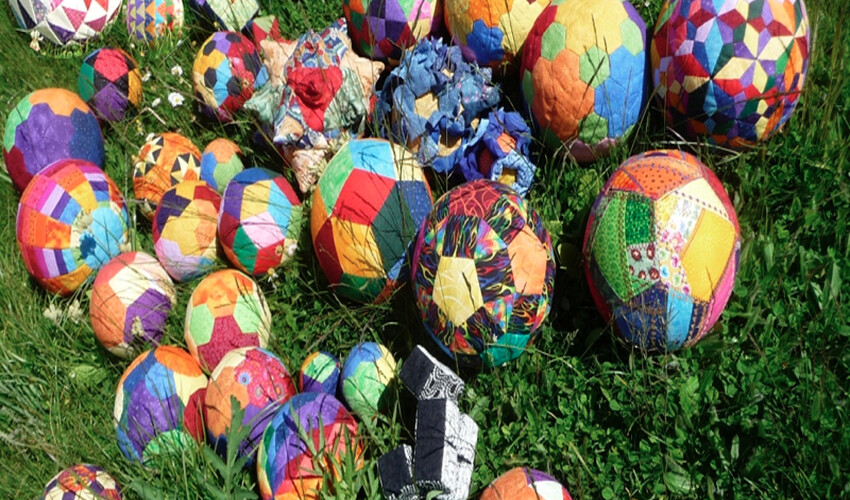 We will choose 20 pieces among your applicatons.

La Passacaglia - The medaillion of Penny Rose and Martin Luther

I like to first plan my quilts with computer drawing designs which I afterwards then color picturing, and the Penrose pattern was a real challenge for me because of the limitless possibilities of interpretation.

In my layout I placed a varied medaillion in the middle, and then I chose to use the Luther Rose as the center for the rosette to form the framework.

I chose the colors, which nicely match the colors in my living room, from four (older) Moda Fat Quarter packets.

A quilt with symmetry.

New Element is the "Lutherrose".

11. August: the middle Rosette is finished

12. August: two Rosettes from round 2 are finished

14. August: first Rosette round 3 is finished.

06. und 07. September 2015: New shapes/templates Schablonen with No Melt Mylar for a friend.

15. September 2015: the big Rosette from Rosettes is finished.

Must change the drawing, for design the borderblocks in the quilt.

16. September: 2 new drawings are finished, but they helped me not for my design.

I painted my new pattern design: Penrose Ballett. In green/white/rose.

21. September: I finished my drawing design for the penrose quilt.

I create and draw for the Millefiori Ballet Quilt the

Penrose Kites and Darts. For my cutting maschine.

With kite and dart I can fill the decagon in the middle of the cough with 2 possibilites.

The Plotter cut the new Kite and Dart shapes.

The next Lutherrose is sewed.

I have sewed some border blocks for the millefiori.

4x Lutherrose with 7 Stars around,

4x Blocks with decagon Penrose in the middle

The picture is not the half way.

a Backingbacking a grey flannel.

Need to cut with plotter another sheet with big and smal pentagon,

The Quilt got an new name:

I find a good link: http://ketutar.deviantart.com/

A drawing picture from the Willyne Book Millefiori Quilt.

I must pull of the paper und cut of the dod ears.

Will finished the handquilting till  Reformationsday (31. November 2015).

08. Oktober 2015: the Paket with the greybluegreen Backing flannel fabric is here. angekommen.

Sandwich the quilt in the night.

and also all little stars.

I am behind my time goal.

I was drawing a lot pattern and shapes for the advent calendar.

31. Januar 2016: the quilt is finished! Complete hand sewed. The red binding is added. My new Yoga quilt. With flannel = very warm for the nap after Yoga.

same fabric as the binding.

A different way to finish the border without having to trim.

My edge solution for Millefiori La Passacaglia: a red piping.
Then I do not have to trim or cut my beautiful EPP work.
And I reach the way a great 3D effect.
The edge material (anthracite) initially with Pritstift / glue stick
Glue on the on the back recorded the quilt top line.
It is the line where I might otherwise cut straight.
Then the edge of fabric with a large sewing machine stitch
1-2 cm from the edge EPP pin.
The red fabric for the binding to take:
my Binding I cut most 3 inches wide / 7.5 cm.
The piping I cut 1 1/2 inches wide / 4 cm.
fold to center. (Iron).
A woolen thread take (polyester wool ...)
stuppsen (fiddle) in the crease,
with the zipper foot to sew woolen thread in the Piping binding.
Then the prepared homemade piping
between the edge of the EPP
and stuppsen (fiddle) the gray edge fabric
and manually gradually sew.
Then remove the sewing machine stitching yarn.

Just try, it's easier than you think,
is actually quite good.
But in my EPP-edge I avoid if possible, the 36 ° angle
of the triangles and small diamonds,
and thus the heaping tip of the seam allowances.
From Binding and from the piping I have prepared about 8 m.
My Yoga cussion also has a piping.
It fits perfectly with my Yoga quilt. ;-)

So far, no one has expressed negative feelings about my edge solution.
On the contrary.
The piping is the icing on the cake. 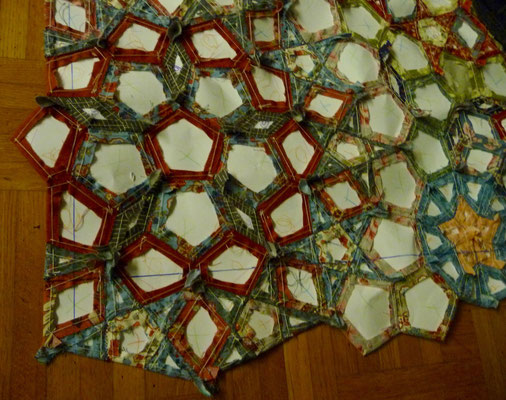 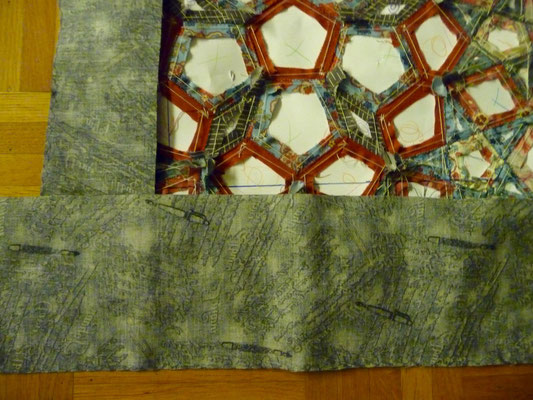 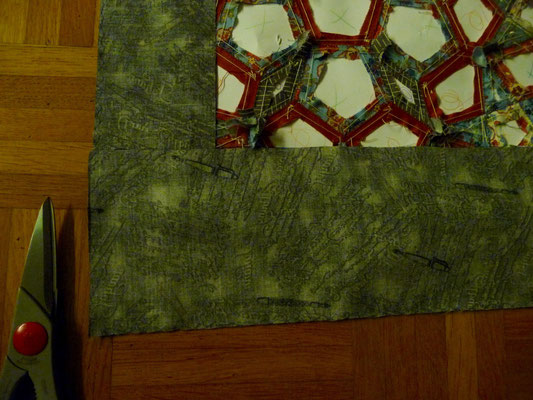 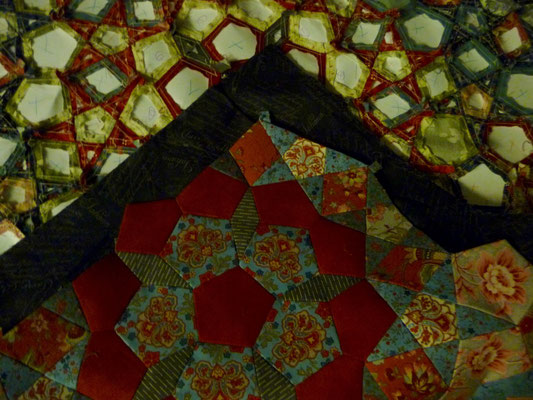 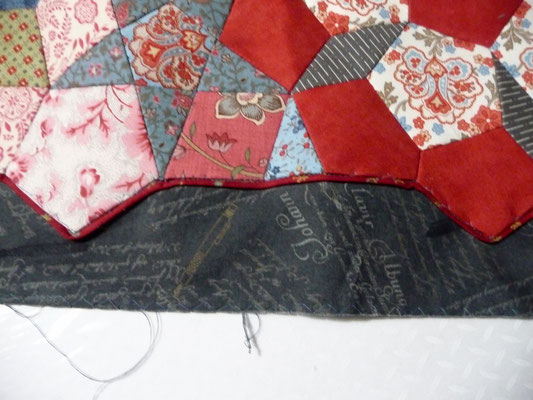 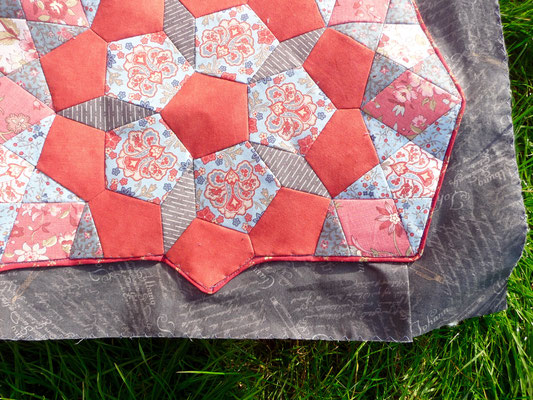 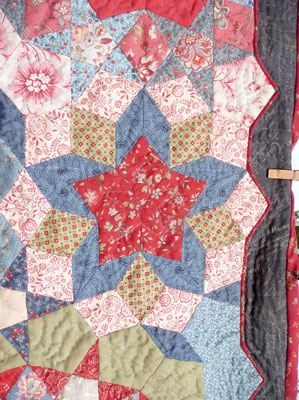 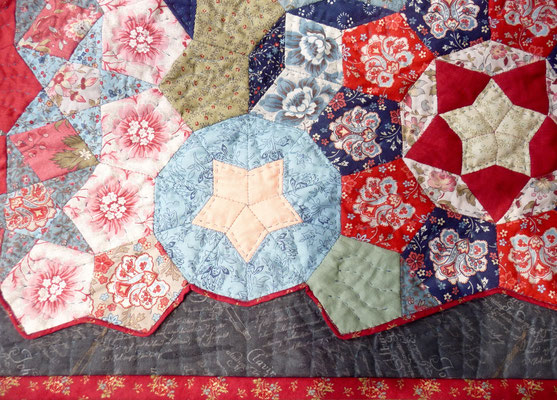 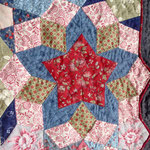 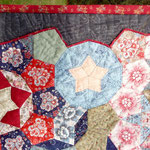 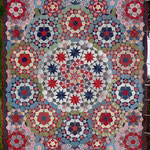 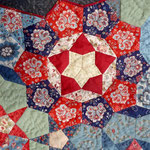 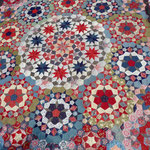 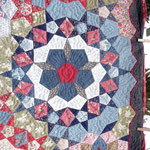 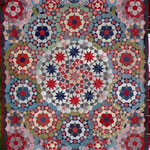 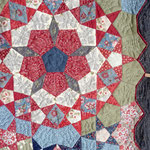 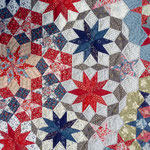 With my brother scan n cut maschine I have cut another eight A3 papers for more than 500 small rhombus.

And nine A3 papers for the penrose kites for the little stars.

Now I have enough paper pieces for the whole quilt.

Also I have cut all fabric pieces.

Mostly I have used fat quarters.

There were four packets with Moda fat quarters.

This is my second Willyne Hammerstein quilt with my

I have enough FQ left over for a third quilt...

I like to first plan my quilts with computer drawing designs which I afterwards then color picturing and the Penrose pattern was a real challenge for me because of the limitless possibilities of interpretation.

For this quilt I symmetrically moved from the middle, a circle of stars, with further star circles, spreading out to the quilt´s border.

Originally I chose again from four (older) Moda Fat Quarter packets the combination green, white and rosé, but when Great Britain voted to leave the European Union with the terrible Brexit decision, this affected my choice of colors and ten stars "in European Blue" found their way onto the quilt.

After the many islamic star tessellation pattern with right angel tiling

I am back to the roots: Rosetten.

In this case the big Cogwheel as Mandala,

the gearwheel as main element in the quilt.

The mosaic got a new border:

now it is a flower tabletopper,

The middle is new: with an islamic design,

The Pattern included the new shapes or templates. 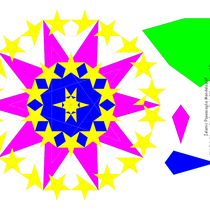 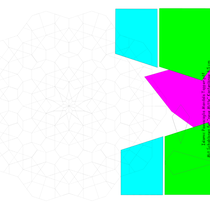 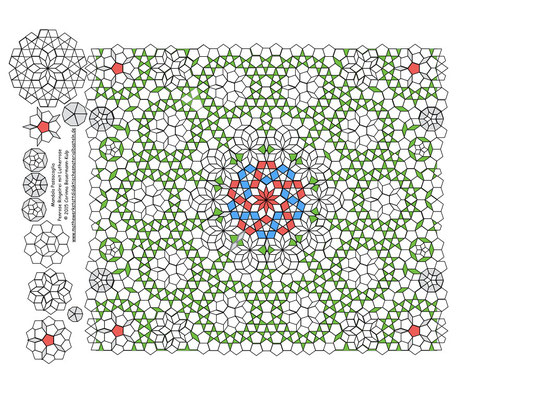 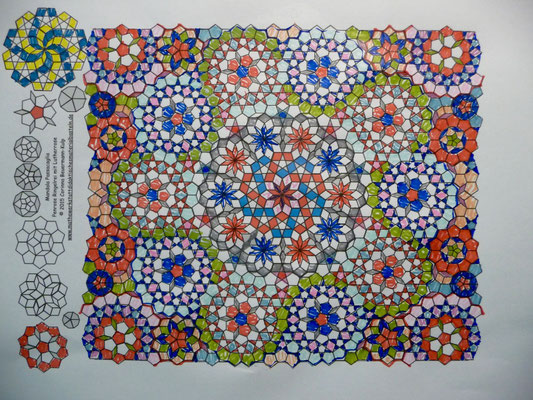 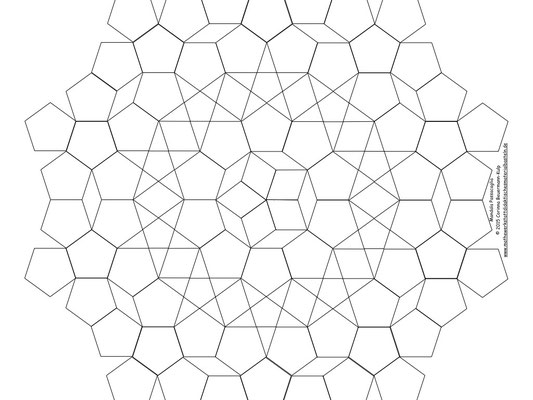 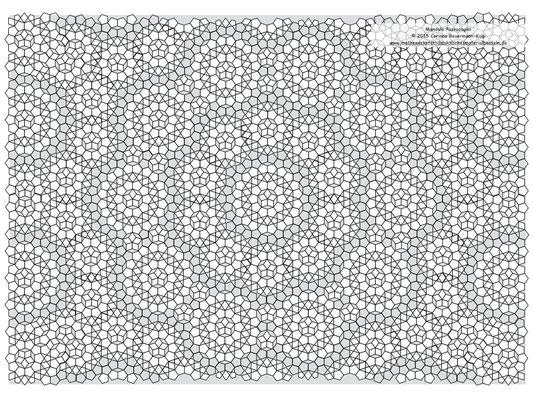 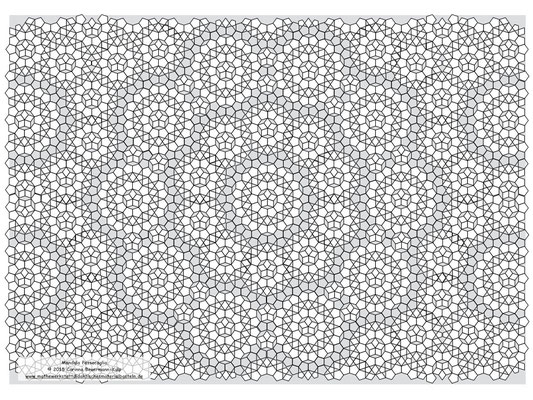 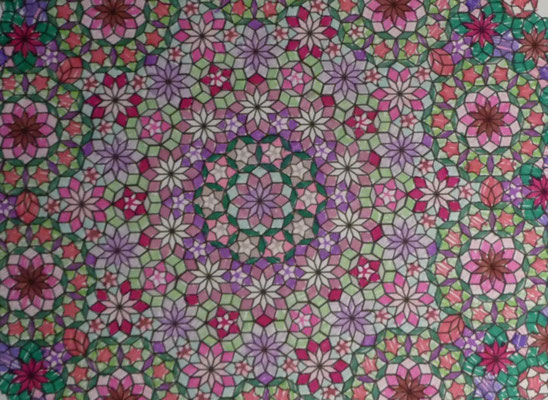 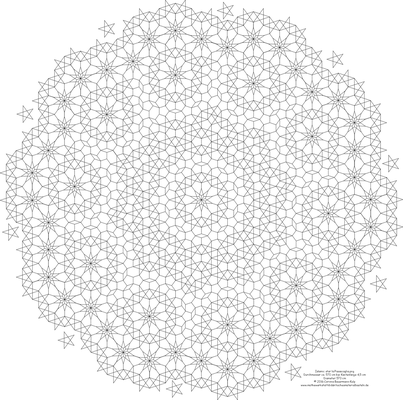 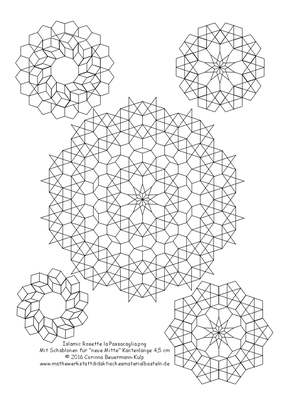 For questions you can email me.

More patterns are hidden everywhere in my homepage.

As example the tab Adventskalender...